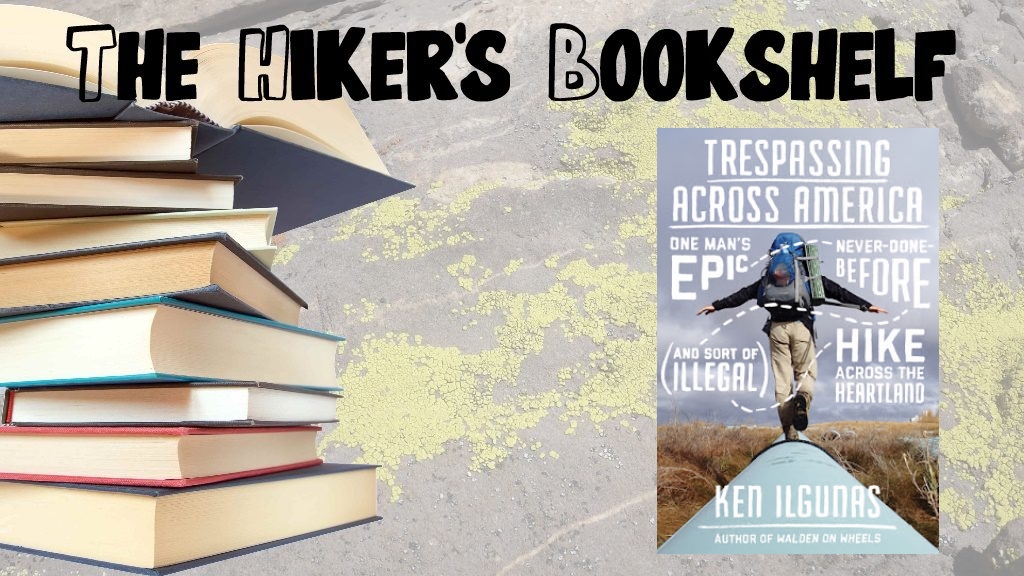 08 Feb Hiker’s Bookshelf: Trespassing Across America: One Man’s Epic, Never-Done-Before (and Sort of Illegal) Hike Across the Heartland 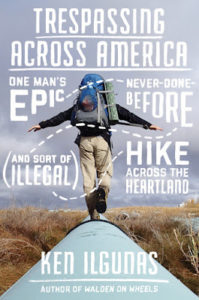 Trespassing is a highly-entertaining narrative of Ken Ilgunas‘s 1,900 mile-long hike along the planned route of the Keystone XL Pipeline. Ilgunas had grown tired of washing dishes for oil workers near Prudhoe Bay, Alaska, and was concerned with the XL’s potential (and highly debated) impact on the environment. More, Ilgunas was interested in the bigger picture that the XL might exemplify: an addiction to cheap oil, without regard to what the Pipeline might mean for the environment (as well as how the XL might symbolize a broader systemic indifference to the environment in the name of consumerism and convenience). And so, he decided to hike the route of the proposed XL Pipeline, from Alberta to Texas.

And to trespass while doing it.

Ilgunas wasn’t following an established hiking trail; he was following a negotiated right-of-way, across vast and innumerable tracts of private property. He set out to trespass–on purpose. Trespassing was not the goal per se: following the Pipeline’s route was. But the XL’s route lay across private property. Following the XL’s planned route with anything approaching specificity necessarily meant trespassing.

Of course, Ilgunas’s plan was met with much skepticism when it was explained to others, and Ilgunas was threatened more than once that he would probably be shot by so-and-so if he got caught on so-and-so’s land. Still, he stuck to the pipeline route as much as possible, though he did frequently find it necessary or desirable to stick to the roads.

Ilgunas does a good job of drawing the reader into his adventure. His descriptions of the landscape, the people, the conversations, and his own perspectives on the trip are colorful and engaging. Ilgunas is a skilled writer, and this results in a just-plain-enjoyable and entertaining account of his unique hike.

Still, there are two areas in which I would criticize Ilgunas for demonstrating a level of tunnel vision.

First, while Ilgunas says that he wanted to find people along the route who were in favor of the XL Pipeline with whom to converse, and indicates that he hoped to find people able to mitigate his opinions on the XL, he concludes that:

Each person spoke to me as if they were doing me some great service, as if they were imparting sage wisdom from ancient texts. But more often than not, I saw that they were propagandized, only regurgitating rumors they’d heard at the local cafe or half-remembered falsehoods they saw on the TV. They talked in absolutes, spoke expertly on every issue, and rarely if ever would you hear someone say, “Well, I guess I don’t know much about that.” They weren’t free-thinking men, but stone tablets onto which dogma had etched its wicked creed.

But not one person I encountered had said anything even halfway intelligent when denying global warming. No one had read books or articles on the issue, and they couldn’t begin to understand how peer-reviewed science works.

Of course, the people that Ilgunas describes in these passages certainly exist, and I’ve no doubt that he met some (many?) of them. However, it is with an exceedingly broad brush that he paints here. This is underscored by the fact that–by his own admission–he was often hesitant to openly dialogue with people about the XL Pipeline or climate change, etc. Instead, when faced with uncomfortable scrutiny on the reasons for his journey, Ilgunas tended to “mutter[] something about wanting to be on a long walk,” instead of directly dialoguing with people who might disagree with him. And the unequivocal charge that the people he met “couldn’t begin to understand how peer-reviewed science works” is condescending at best, as Ilgunas makes no attempt to maintain that he routinely discussed peer review methodology with the many people he encountered on the trip.

Similarly, Ilgunas unfairly patronizes Christians and people of faith in the book, though almost certainly unintentionally. He speaks quite positively of people of faith throughout the book, and fully recognizes the “kind treatment” he received from religious people during his hike. However, he wonders if Christians’ views on things like same-sex marriage and abortion “might have had more to do with being secluded in a fairly homogenous culture–which they’d been brought up in and had little control over–and less to do with their mostly good-hearted religious teachings.

It is far beyond the scope of this review to take up in detail the faults with this postulation, but I’ll present these: (1) Ilgunas makes no apparent attempt to understand the religious and doctrinal reasons (the “mostly good-hearted religious teachings”) underlying the religious beliefs he criticizes; and (2) the assumption that the people in question are “secluded in a fairly homogenous culture” is unfortunately patronizing and demeaning of the very people whose charity and good deeds he recognizes.

Ilgunas made a routine practice of seeking out churches and pastors to find places to stay in the towns he went through, which makes his patent reluctance to converse with religious people about the reasons for their beliefs all the more unfortunate. Ironically, it is Ilgunas’s criticism of climate change skeptics that perhaps most saliently describes his own blind spots:

They think themselves enlightened for resisting all this new proof and remaining steadfast in mistrusting anything that someone else says. But it is a false enlightenment to accept only those ideas that align with one’s worldview and reject those that don’t. (emphasis mine)

As a disclaimer, Ilgunas describes with some level of detail some of his own sexual desires and fantasies from time to time, and for this reason, I cannot recommend the book for younger readers.

Overall, the book is a lot of fun. Truly. It is well-written, good-humored, and has a lot of highly-entertaining material to fill its pages. I found more than a couple of true laugh-out-loud passages in the book. I very much enjoyed it, and recommend it for the reading hiker. Ilgunas also has a soon-to-be released book entitled This Land is Our Land: How We Lost the Right to Roam and How to Take it Back, on schedule for release in April, 2018. I definitely look forward to reading it.

The Book: Trespassing Across America: One Man’s Epic, Never-Done-Before (and Sort of Illegal) Hike Across the Heartland (Blue Rider Press: New York, 2016). Get the book from Amazon here (multiple formats).