06 Jun Hiker’s Bookshelf: Braving It: A Father, a Daughter, and an Unforgettable Journey into the Alaskan Wild 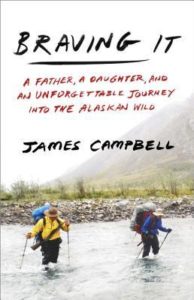 When author James Campbell’s cousin, Heimo Korth, invited him to help him build a cabin in the Alaskan wilderness, he jumped at the chance. But Campbell decided not to go alone: he took his 15-year old daughter, Aidan, with him. He had been promising her he would take her to Alaska for years, and thought that she was now old enough, and that the experience would be a good one. After two trips to the Korths’, Campbell and Aidan returned to Alaska for a third trip, this time backpacking over the Brooks Range and then canoeing down the Hulahula River to the Arctic Ocean.

Campbell introduced us to his cousin Heimo in The Final Frontiersman, which described how Heimo and his wife Edna managed to carve out a living for themselves and their two daughters in the harsh Alaskan interior. Fans of The Final Frontiersman will enjoy Campbell’s and Aidan’s experiences at Heimo’s and Edna’s for the same reasons as they enjoyed the first work. But Braving It is not a mere sequel, or a continuation of the story in Frontiersman. Heimo’s and Edna’s stories do feature prominently in Campbell’s latest book. But unlike Frontiersman, this later story isn’t really about them.

Braving It is full of first-hand stories of the outdoors: of fishing, caribou, wolves, and bears. Of bitter cold, and dangerous whitewater rapids. But this story is not primarily about those things, either. In fact, it’s not even really about Alaska.

Instead, it is about a father’s relationship with his teenage daughter, particularly in that period when she is no longer a little girl, but still not quite grown. Campbell is candid about his own struggles and shortcomings as he struggles to find the right balance between leading and protecting his daughter on the one hand, and trusting her and allowing her to grow up on the other. Campbell explains that his plan to take Aidan to Alaska was intended as a sort of coming-of-age experience which might help her learn more life skills. Perhaps ironically, it is Campbell’s own transformation that the book truly chronicles, as he works to fashion a deeper bond with his daughter, even as he learns to let go of his little girl.

In Braving It, Campbell tells of his and Aidan’s trips to Heimo’s and Edna’s to help build their new (and presumably, last) cabin, and their return trip to visit Heimo and Edna during the cold winter months. Campbell also details the exciting and challenging trip over the Brooks Range and down the Hulahula, including how he and Aidan learned to team together in the canoe. If you like stories of the wilderness—particularly Alaska—you’ll find this book highly enjoyable. If you also happen to be a father, you’ll find it all the more relevant and meaningful.

Being a father of two little boys myself (6 and 3) and with one on the way (due July 2017!), I can identify with Campbell’s desire to experience the wilderness with his children. Though my own children are younger, I’ve already begun to fantasize about how I hope we will adventure together for many years to come. When the time comes, I hope I too can let my little boys go, while at the same time keeping my sons as close as ever.

The book: Braving It: A Father, a Daughter, and an Unforgettable Journey into the Alaskan Wild (Crown Publishers: New York, 2016). Get the book on Amazon here.