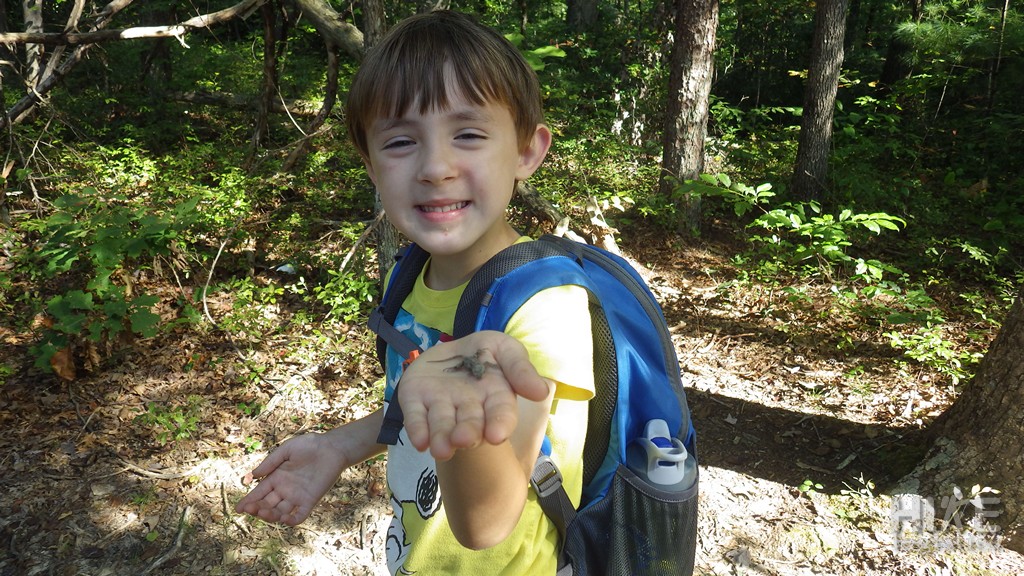 06 May 10 Tips for Getting the Kids on the Trail 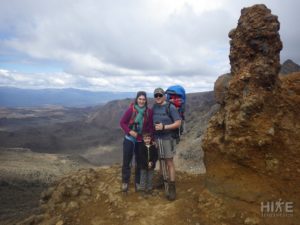 Harp Family in 2015 on the Tongariro Alpine Crossing, New Zealand

Hiking and camping with your kids is a great way to spend meaningful time with them and to get them hooked on the outdoors. It’s also an activity that you’ll be able to enjoy with them at any age, even after they’re grown and have their own kids.

Last week, I took my two boys, Declan (6) and Dominic (3) on an overnight backpacking trip to the Red River Gorge in Kentucky. Declan has been on many overnight backpacking trips. At 3, Dominic has camped in primitive campgrounds in the Badlands, Yellowstone, and Grand Teton National Parks, but this was his first night in the backcountry. We had a good time, and that trip got me thinking about the importance of getting kids into the wilderness. Here are 10 tips for getting your child into the bush:

It’s possible that this is one of the most important steps. Don’t wait until your kids are absorbed in sports and video games before you take them to the bush. A kid who has traveled all his or her life is less likely to be thrown for a loop by a road trip. And kids who have been playing in the woods as long as they remember are more likely to embrace everything that comes with it, even the sometimes-uncomfortable stuff. On the other hand, if you wait until your child is older before you introduce them to the wilderness, they’re more likely they are to focus on any negative experiences (rain, blisters, fatigue) and decide the whole thing wasn’t worth it.

I took my son Declan (6) on an overnight backpacking trip a few weeks ago. While crossing a stream, Declan slipped on a log and plunged head-over-heels into the drink. It was an unseasonably cold night: he was soaked, cold, and (very) miserable. I got him to camp quickly, stripped him down and put dry clothes on him, and put him next to a fire. The shivers subsided, he warmed up, and enjoyed the rest of his trip. The day after we got back, he was bragging to his friends at church about the mishap. Two weeks later, when I asked him if he wanted to go again, he didn’t hesitate. By now he knows that he loves the outdoors, and one bad experience isn’t going to be enough to change that. 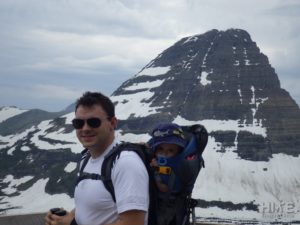 I realize it’s ironic to address this right after the story I told above. Nevertheless, it’s important to do whatever you can to make the experience an enjoyable one. Don’t try to make your 5 year old an ultralight backpacker by leaving behind the mattress, stove, and tent. Make absolutely certain that your child has the right clothes, bedding, and food. Ensure you have plenty of layers of clothing (especially in cooler weather), and give the child an air mattress to sleep on. (Only one air mattress? Let the kid have it.) Take snacks and meals they can get excited about.

And don’t overwork them. Don’t tear off more than they can handle, and take plenty of breaks. They may have more energy than you, but don’t forget that you’re bigger and stronger than they are. That little one may be taking two or more steps for every one of yours.

Some of the worst experiences in the wilderness are due to bad planning, and this isn’t only true for kids. Bad planning often leaves hikers of all ages miserable, lost, or worse. When you take your kids out, they’re relying on you to keep them safe and ensure they have a good time. As much as possible, be prepared for anything. All of the rules of planning a hike apply to taking your kids to the backcountry, even if you’re only going out for a night. Know where you’re going, the terrain, and the weather forecast. Make sure your first aid kit is stocked. Make sure someone back home knows where you’ll be. 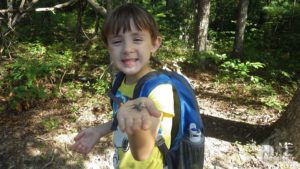 3-year old Declan shows off an Eastern Fence Lizard in 2014.

Let them own the experience. Kids like to feel like they’re doing something important, and giving them a backpack with their own clothes, a small water bottle, and their favorite snacks will involve them directly. Trust me: they’re always willing to carry some snacks. Of course, this isn’t the place for tough love: be careful not to overburden them. Trying to get your kindergartner to carry a backpack with a full 2-liter water bladder is probably not going to end well.

In addition to carrying a backpack, make sure they have their own stuff in camp. At a minimum, they should have their own mattress, sleeping bag, and pillow. Headlamps or flashlights are sure to be a favorite, but be prepared to shield your eyes frequently. 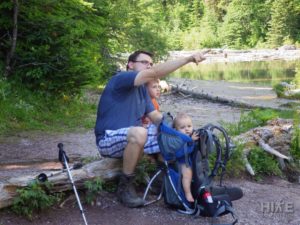 You don’t have to do everything for them. Backcountry skills take time and are learned in degrees, to take them to school! Let the youngest kids lay out their pillow and sleeping bag. Ask them to gather twigs for the fire. Teach them how to work the buckles and straps on their backpack. Show the older kids how to put up the tent or build the fire; and when they know how, let them do it. Look at the map with them. Use a compass, even if you don’t have to. Show them how to find a safe campsite, away from hanging limbs or dead trees. Teach them how to identify poison ivy. Teach them to leave no trace.

Kids are sponges for this stuff. Even so, there’s a learning curve, so be patient.

6. Explain things to them. 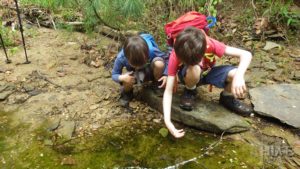 Even if you’re not a bona fide survivalist, you still have much you can teach your kids about the wilderness. If you can identify only one tree, then point it out to them. Tell them the names of the plants, insects, and animals around them if you can. Your child may not realize that some mushrooms are poisonous. Listen for owls or whippoorwills. Point out the North Star and constellations. Show them a game trail, and when you find animal tracks, try to identify what left them.

Last week, my boys were mesmerized by a puddle full of tadpoles. It was something special to hear my three-year old explaining to mommy that he had held “tiny frogs with little tails” in his hand. It’s one thing to see it on TV, another to hold something in your hand. 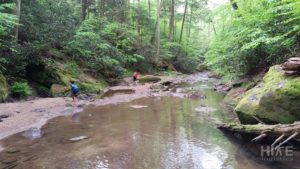 Exploring a stream in the Red River Gorge, April 2017.

Take them to cool places where they can see things they don’t usually see. Play in a creek. Let them get dirty (they will anyway). Let them stay up a little later than usual around a campfire. Let them wander around a little (but not far; keep track of them!). Have them bring a toy (but leave the electronics at home). They will probably be too distracted with other things to actually play with it, but they’ll like the idea that they could if they wanted. Take a game. Tell stories. Go explore something they want to investigate.

Most kids spend little time outdoors, and even less in the wilderness. There’s so much to see and enjoy. Don’t cheat your kids out of the wonder of the wilderness by being in a hurry. Not only is taking your time an important part of tips 2 and 7 above, it’s important for its own sake. In a fast-paced lifestyle, there are few times we get to slow down and be in no particular hurry, and perhaps even fewer times we get to spend that kind of time with our kids. Teach your kids that the wilderness is one place where it’s OK to stop and smell the flowers, play with a stick, or stare at clouds.

The boys take a break while on a day hike with dad in early 2015.

Don’t underestimate this part. Tell them what they’re doing right. You may be surprised how much a simple “great job!” can put pep in a child’s step. When they make a good decision about how to navigate around or over a fallen tree, point it out. When they successfully cross a stream without getting water in their boots, give ’em a high five. When they charge up a hill and leave you in the dust, make it a big deal. Sometimes, things won’t be perfect, as with the story I told earlier about Declan falling in the stream. So when things aren’t perfect and they experience rain, cold, soreness, or other discomfort, tell them how tough they are. 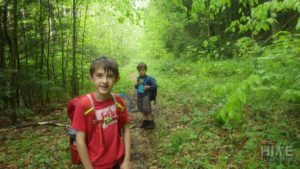 Hiking out to pizza!

When taking a break, making it to camp, or hiking out, give kids something to look forward to. At longer breaks, let them have a snack. At camp, give them hot chocolate or some other treat.

Plan a post-hike reward, too. It can be as simple as pizza or ice cream (or preferably, both!). Maybe a small toy. It could be some fun activity like go-carts or a boat ride. Whatever it is, make it a part of your planning, and let them look forward to the reward.

Now, start planning a trip to get the kids out there!

We’d love for you to share your own tips or experiences in the comments below!