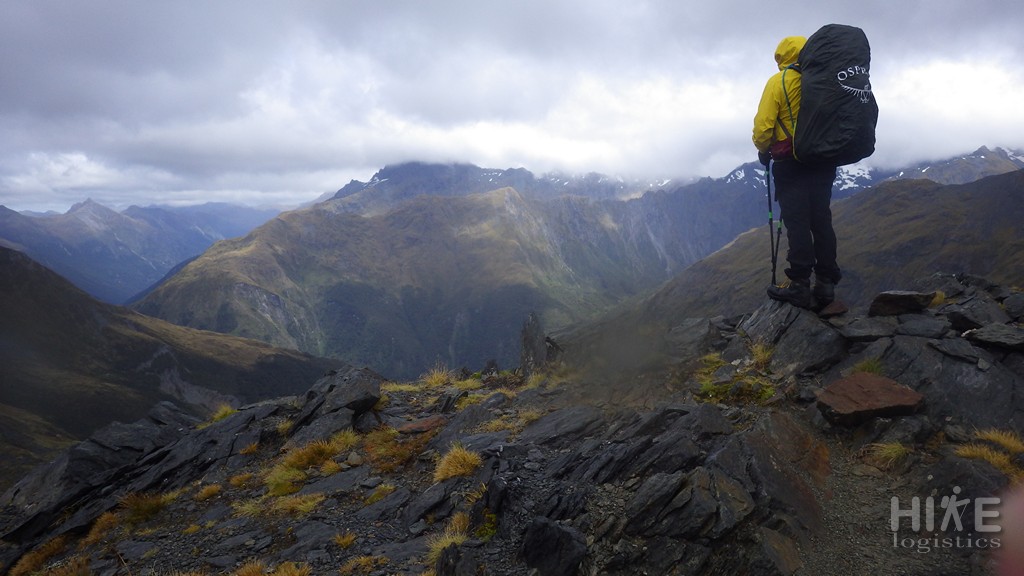 Accompanied by my brother-in-law (a bona fide Kiwi), I hiked this ~70 mile (113 km) route over 6 days and 5 nights in March 2017. The trek itself was one of the toughest 70-mile stretches I’ve hiked, but the extraordinary scenery made the exertion well worth it all. 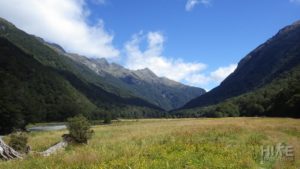 Westward into the Young Valley

After flying into and staying in Queenstown for a night, we caught a tour bus up to Makarora, and the driver was kind enough to drop us right at the Young Valley trailhead on Highway 6, which is about 4.3 miles (7 km) north of the Makarora Cafe (where we both ate an order of last-minute pre-hike fish and chips–the bus actually stops at the cafe). Once on the trail, we crossed the Makarora river and headed up the Young Valley Track toward Young Hut, our destination for the night. 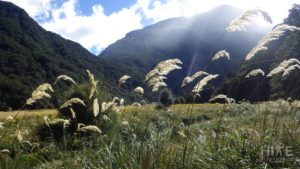 Toitoi in one of the several small valleys along Young River

An aside about nomenclature in the New Zealand parks. New Zealand footpaths are rarely called “trails,” as Kiwis prefer the term “track.” In NZ Department of Conservation (DOC) parlance, a “track” is a formed footpath, and a “route” is an unformed but passable route navigable by people with “high-level backcountry skills and experience.” It may or may not contain an actual footpath. Sections of both tracks and routes may be unmarked, which heightens the importance of good maps and navigation skills.  More than once we picked our way across large, deep-grassed valley floors without any visible footpath and without (or very infrequent) trail blazes or markers, and this was sometimes the case on sections considered “tracks” in addition to “routes.” 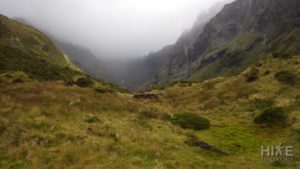 The valley below Gillespie Pass, west of Young Hut

These “tracks” and “routes” are generally not like the “trails” to which U.S. hikers are accustomed. Do not expect to anything approaching the kind of mileage you can expect on the Appalachian Trail. Even the “tracks” are frequently unformed, unmarked, and unidentifiable. And apparently, Kiwis have an unnatural aversion to switchbacks. The track often scrambles up (and down) over 10-foot vertical or near-vertical walls, steep rock slides, and relentless inclines. Often you must rely on roots, trees, rocks (and faith) for handholds and footholds to navigate these obstacles.

Perhaps this is why New Zealanders don’t call this “hiking.” Instead, it’s called “tramping,” which does seem more descriptive. 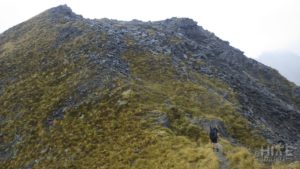 Back to the “track.” The initial walk up the north leg of the Gillespie Pass Circuit Track was pretty casual, following closely (but usually not conveniently) next to the Young River, with little elevation variance. Once we got to the bridge at the North Branch of the Young, the track changed substantially, and there were numerous steep climbs (up and down) as we netted another 1100 feet of elevation over the next 4 miles.

The hut was a nice, three-room affair, with two bunk rooms and one large multi-purpose (e.g. cooking, eating, talking) room, and running water supplied from a rain barrel.  The “huts” in New Zealand parks usually (always?) have mattresses (the plasticky anti-absorbent kind).  The huts are equipped with wood stoves, and are stocked with firewood or coal for the stoves. We shared the hut with four other hikers that night. 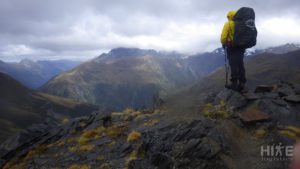 Josh looking south off of Gillespie Pass, with Mt. Awful hidden in the clouds on the right 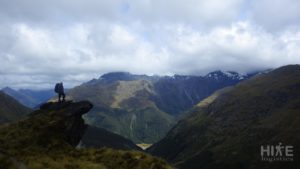 The next day was Gillespie Pass. The morning was nice, but cool, and heavy clouds hung at and just above the tops of the surrounding mountains, including Mt. Awful just to the north. The climb from the valley floor up to Gillespie Pass was steep and unrelenting, but not technical or unsafe. The clouds didn’t permit long-distance views from the pass, but the views were quite lovely nonetheless. The descent down the south side of the pass was not as steep as the climb, but it was still a joint-jarring walk down to the Siberia Valley.  We stayed at Siberia Hut on night 2, which was at its capacity of 32 (including all six of us who had been at Young the night before).  Like Young, Siberia is a newer three-room hut with running water. Unlike Young, Siberia has a hut warden on-site in a small apartment next to the hut, who treated us warmly. 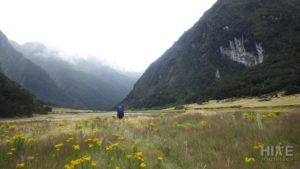 Our third day, we hiked the long trek down from Siberia to the Wilkin River, and then up the Wilkin to the Top Forks Hut, a total of about 12.5 miles (20 km). The descent from Siberia to Wilkin was very nice, and we were often accompanied by many fantails (a lovely, curious little bird that likes to investigate hikers up close). The walk up from the Wilkin Hut to Top Forks was mostly uneventful, except that crossing Jumbo Land was frustrating. Instead of a trail, there is a total absence of any trail markers, and you must make your way through lots of soupy and hillocky grassfields. This was painstakingly slow going, but we made it to Top Forks timely. 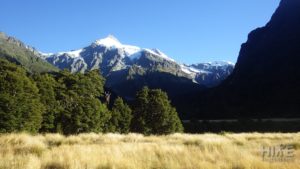 The views of Mt. Pollux from Top Forks Hut are exceptional

Top Forks is an older, one-room affair that bunks 10. Snugly. It does have some incredible views of Mt. Pollux to the north. The hut was near capacity, and everyone was older than Murray and me, except for a young guy (22-24?) guy from Nashville. 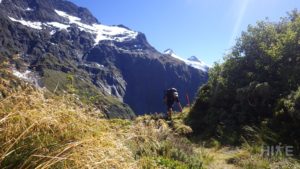 Day 4 was to be the toughest day. From Top Forks, the trip over Rabbit Pass involves a 4-mile hike up to (and across) the “Waterfall Flats,” then 700-foot (213 m) climb up the very steep “Waterfall Face.” The route is poled, but there were at least a couple of places where the intended route was not obvious. The entire climb from the valley floor is steep and has about a zero-error tolerance. While the route was mostly pretty easy to find and follow, it is steep enough that if you did lose your footing, your outlook would be grim (for just a few moments-time to repent on the way down). People have died on this section before, and it should not be attempted when icy or wet. It’s dangerous. 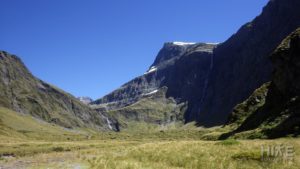 The Waterfall Flats and the Waterfall Face, toward Rabbit Pass. The track climbs to the right of the smaller waterfall on the left. The photo is deceiving: that’s a 700-foot “bump.”

Murray taking a break before pushing up the Waterfall Face; this photo gives some perspective on the height of the climb.

Before leaving Top Forks, we had learned that a couple there had planned to hike to the base of the Waterfall Face and go over Rabbit Pass the next day. Nashville said he planned to go up to the based of the Waterfall Face and take a look, then go back to Top Forks for the night, then go up and over the next day (which made little sense to us). Everyone seemed surprised to learn that Murray and I had hiked all the way from Siberia in one day, then were heading up and over Rabbit Pass the next.

As we made our way up toward Rabbit Pass, Nashville passed us, having decided to go up and over Rabbit Pass the same day as us after all. We hypothesized that he didn’t want the old guys to show him up. 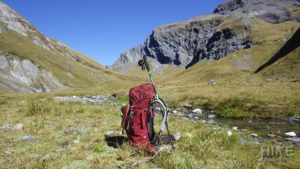 Near Rabbit Pass. The track follows the valley near the center of the photo out of sight to the left. 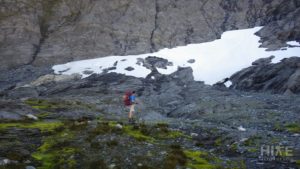 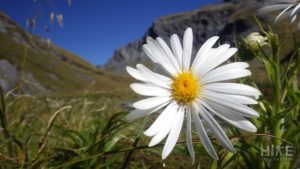 We made it up to the Rabbit Pass plateau without incident, and were rewarded by spectacular views as we made our way south to the pass. 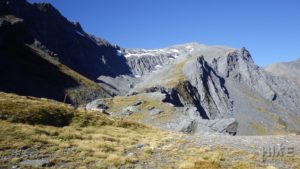 The scramble up toward the descent from Rabbit Pass

Below the treacherous cliffs and talus descending from Rabbit Pass. Photo fails to show how dangerous this stretch can be.

Once at the “pass,” there remains a about a 1-mile climb/scramble of about 450 vertical feet up to the marked (only?) way down. From there, the route plunges down a very steep, stepped rock face with plenty of opportunities to fall and break something important. The rock here is very brittle sedimentary stuff, which breaks and moves easily. Finding good hand- and footholds for scaling down the rock face is a problem. I had one handhold begin to fail while I had most of my weight on it. Murray had a foothold give while he had most of his weight on it. Fortunately, both of us were able to react quickly and shift our weight elsewhere, and we made it down without major incident. But make no mistake, this section is fraught was danger, and we were relieved to be on firm ground once again. 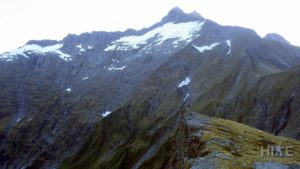 Josh atop a cliff along the descent from Rabbit Pass 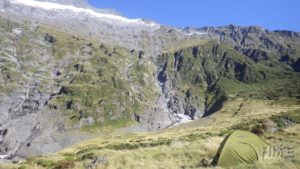 Campsite at the head of the valley below Rabbit Pass

We camped that night at the head of the valley just below Rabbit Pass. Nashville came in later and camped a couple hundred yards away from us, though we were not sure how he had gotten behind us. It got cold enough that we had a heavy frost on tent overnight, but we stayed quite comfortable. 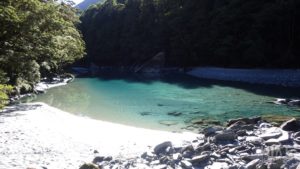 Pool of water along the East Matukituki River. Yes, the water really is that blue.

The next day (5) we made our way along the East Branch of the Matukituki River down to Junction Flat. The track deviates from the river up over 1300 vertical feet (400 m) over about 2 miles, and the route here is grueling, often requiring short vertical and near-vertical scrambles. Roots often provide the handholds. At one point while Murray and I were considering how to mount a steep shoulder over a ravine drop off, Nashville caught up with us. Full of bravado, he went right to work climbing, and nearly pulled a large rock down on top of us before he decided that wasn’t the best route after all. He found a different way and went on ahead. 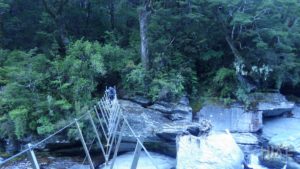 Murray crossing the walkwire on the south side of Junction Flat

We crossed the first walkwire at Junction Flat and camped in the woods at the north of the Flat. We hiked out to the Raspberry Creek Shelter the following day (6), where we caught a pre-arranged shuttle with Alpine ConneXions back to Wanaka and then back to Queenstown. 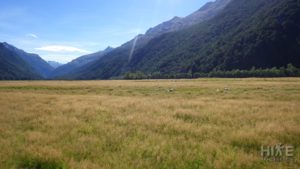 Sheep in Cameron Flat, near the Mt. Aspiring Road and not far from our trip terminus.

This trip was truly spectacular, and we were blessed with exceptional weather. While I would highly recommend the trip, I would observe that nothing quite prepared us for the descent from Rabbit Pass–it was quite more sketchy than we expected. Were I to do that section over again, I would use climbing helmets at a minimum, and would be inclined to take climbing rope. Hiking through Cameron Flat on the way out on our last day, we ran into a DOC worker who stopped and chatted with us for a few moments. When I observed that Rabbit Pass had been “dodgy,” he just got a wry smile and said “Well, this is top-level hiking we’re talking about here.” 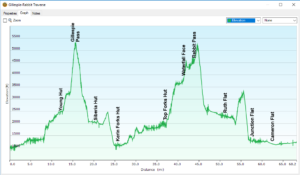